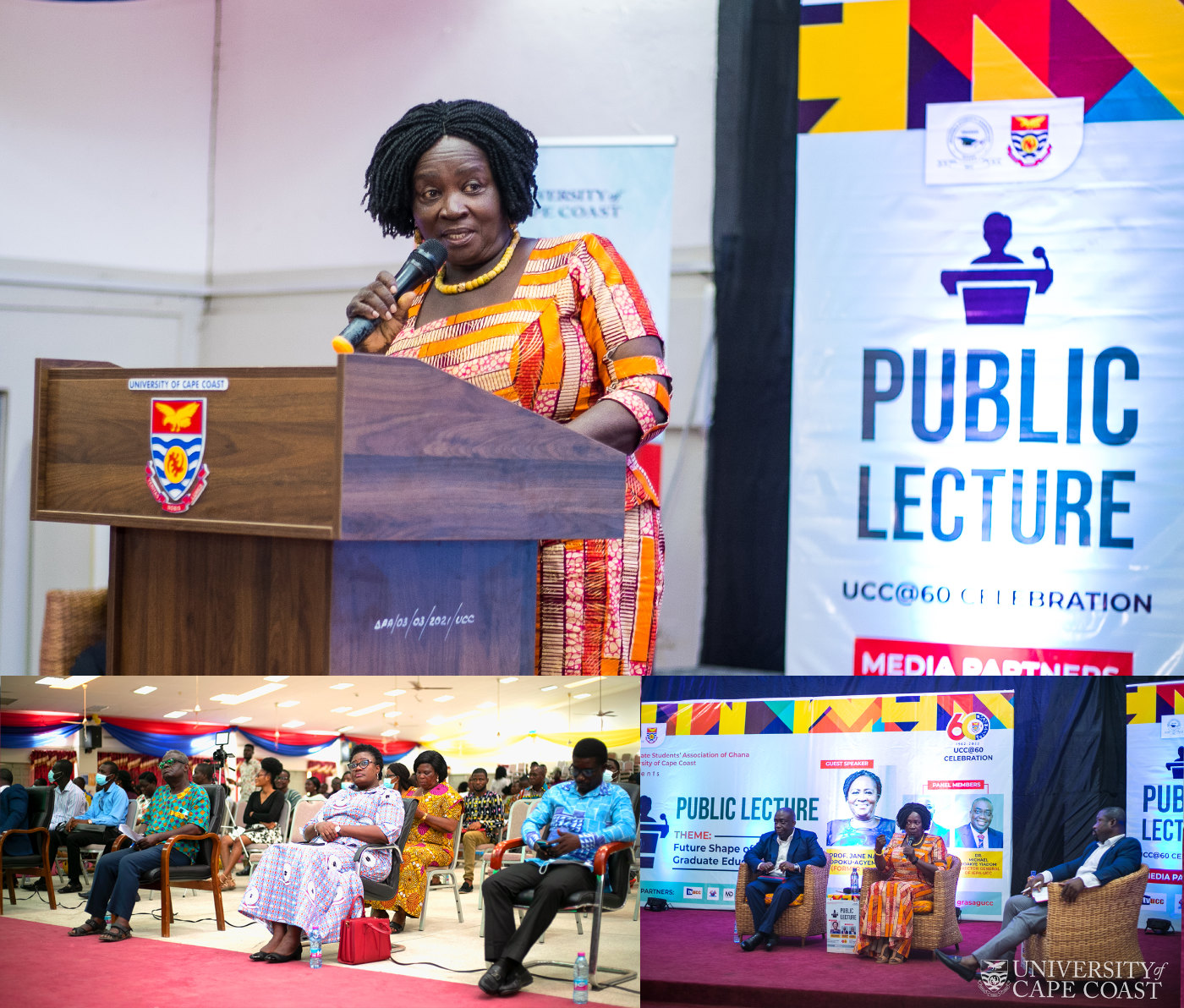 A former Vice-Chancellor of University of Cape Coast, UCC, Prof. Naana Jane Opoku-Agyemang, has underscored the need for researchers to be financially resourced to undertake research for the development of the country. According to her, tertiary institutions must objectively review the research component of their funding.

Prof. Opoku-Agyemang made these remarks while delivering the maiden public lecture of the UCC wing of the Graduate Students’ Association of Ghana (GRASAG-UCC). The event formed part of activities commemorating the 60th anniversary celebration of UCC. Themed; ‘Future Shape of Sustainable Graduate Education’, the lecture brought together students, Provosts, Deans, heads of Departments, traditional leaders, as well as representatives of some religious bodies.

She recommended funding by the sectors of industry that would benefit directly from research efforts. Such beneficiaries, the former Vice-Chancellor pointed out, could be weaned off government scholarship so that the fund allocated would support those with interesting ideas ‘ but not necessarily with any funder.’

Prof. Opoku-Agyemang also used the occasion to clarify a popular misinterpretation that she was pushing for the scrapping of the research allowance to establish a research fund during her tenure as Education Minister.

According to her, due to the high financial commitment to research in the country, very capable members of faculty have fallen short of achieving so much in the area of research due to lack of opportunity including funding. The former UCC Vice-Chancellor said she only proposed an inculcation of the research allowance into the salaries of university teachers and not its scrapping.

“The research we had done then, the lobbying we had done from the ministry and the big funders we had approached…coincided with our initial idea that rather, let us include the research allowance into the salary so it does not hang as an allowance and we did not mean scrapping which had become a buzz word then” she explained.

She further explained that upon rolling the allowance into salaries of lecturers, which would be paid over a twelve month period within a year instead of being paid in bulk, beneficiaries would not ‘lose anything’. This would have then paved way for the creation of the fund which would support research extensively, she added.  This intervention, however, was largely condemned.

At that time, Prof. Opoku-Agyemang said she had wanted academia to provide her with concrete research findings to demonstrate their likability or otherwise for research allowance and not research fund.

Speaking to the alumni of the University, she urged them to promote the image of the University and raise ‘our centers of research as places where values could be added to existing practice.’

She lauded the University for introducing course work, joint degrees, article base thesis, and academic writing courses for graduate students.

She was however quick to point out to university authorities the need to consider using academic writing course as part of the processes of admitting graduate students.

She commended Nana Sam Brew Butler, a former Chairman of the UCC Council and Sir (Dr.) Sam Jonah, Chancellor of UCC, for their contributions to funding and facilitating the work of graduate studies.

Prof Opoku-Agyemang also extolled the University’s desire for novelties. “The distinctive character of UCC is our penchant for innovations. We grow most of our programmes from scratch and carefully develop them into sustainable and relevant ends” she added.

The event was chaired by the Provost of the College of Distance Education (CoDE), Prof. Isaac Galyuon.

The Elite Dance Ensemble from the Department of Music and Dance entertained the audience with beautiful traditional dances.