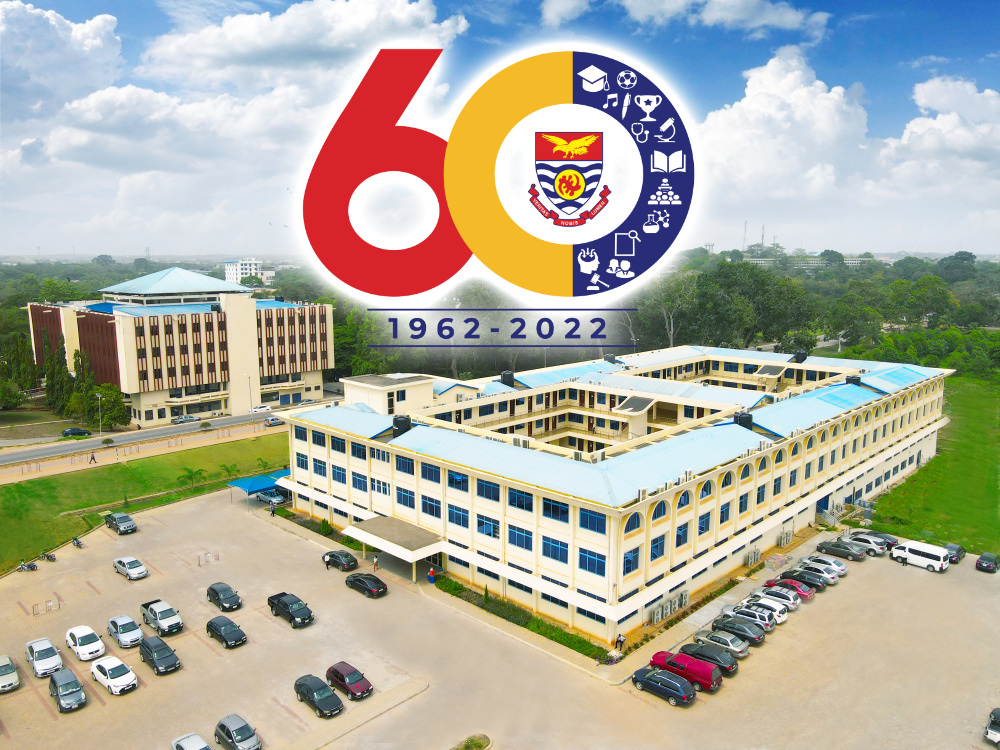 The University of Cape Coast (UCC) is 60 years, Hurray! To the university community, the general public and academic watchers, this can only be an exciting news. Needless to suggest, this calls for a mixture of reactions. As a university community, we need to pat ourselves on the shoulder for a job well done. While at it, the time also presents an opportunity for self-introspection to take a look at how we got here, where we faulted and to right our wrongs. Most importantly, it also affords us the opportunity to look into the future with a view to strategising to maintain our lead and improve on it.

UCC, as it has come to be known, was established in 1962 as a college in October. This was as a result of a recommendation by an international commission appointed by the Government of Ghana in December, 1960, to advise on the future of university education in the country and the possibility of establishing a third university at Cape Coast.  The College was formally inaugurated on December, 15, 1962 and placed in special relationship with the University of Ghana, whose degrees it awarded.

The first graduates of the University College of Cape Coast.

With an initial student intake of 155 in a few buildings taken over from a teacher training college, the College expanded so rapidly in size that by 1965 the development of the permanent campus, 1.6 kilometres to the north of the original site, had begun.

Where Are We Now?

Sixty years of commitment to its core values of excellence as well as a vision to have a university that is strongly positioned with worldwide acclaim has turned UCC into the University of Competitive Choice in Ghana and beyond. It is an equal opportunity university that is uniquely placed to provide quality education through the provision of comprehensive, liberal and professional programmes that challenge learners to be creative, innovative and morally responsible citizens.

The University extends expertise and facilities to train professionals for the educational enterprise, business and other sectors of the economy. The University of Cape Coast is constantly seeking alternative ways to respond to changing needs of society. It also continues to expand the core of its faculty and administrative staff by offering a conducive environment that motivates them to position the University to respond effectively to the development needs of a changing world.

The student population of the UCC has increased over the years due to the increasing need for higher education and the introduction of different modes of learning. The University currently runs the regular, sandwich and distance modes of learning. These have helped expand access and brought university education to the doorsteps of potential students. Current student population stands at 79,441. These are made up of 26,527 regular, 19,201 sandwich and 28,519 distance students. The Institute of Education also has 19,201 sandwich students. 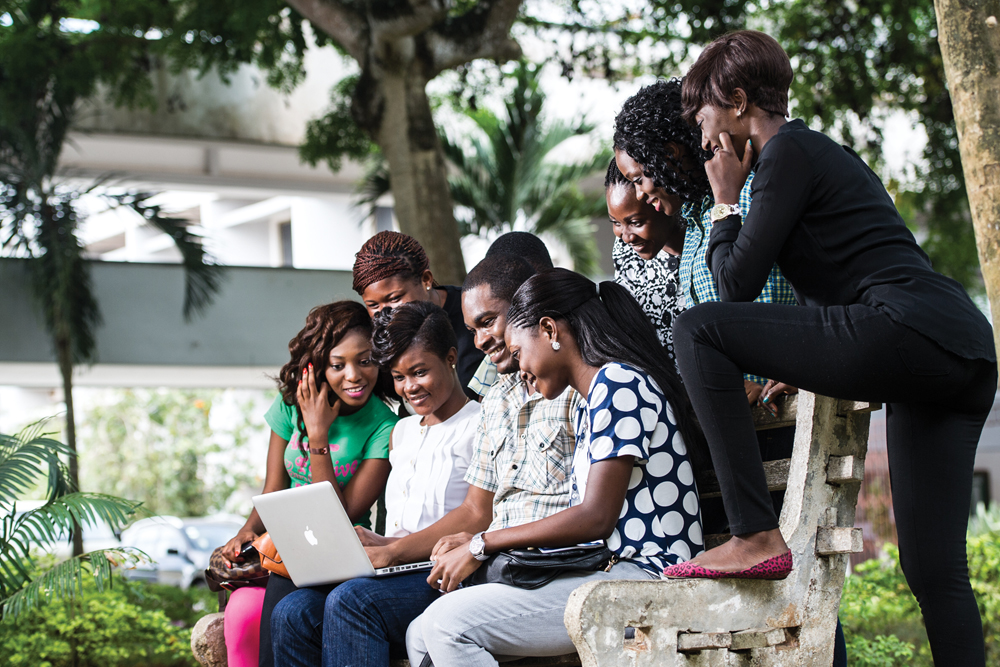 The specialisations of staff cut across various professions such as medicine, pharmacy, natural and agricultural sciences, education, law, humanities, administration, and business among others. Staff improvement has been vigorously pursued with most faculty members acquiring PhDs. The University has also assisted administrative staff to build their capacities through continuous professional development to be able to deliver on their mandate.

In the area of research, UCC has been very active in spearheading new and improved seeds and seedlings for the country’s farmers. They include beans and cassava. Presently, the University is undertaking research into high yielding sugar cane for the Komenda Sugar Factory. No wonder it was ranked as number one in research influence globally, by the renowned Times Higher Education ranking agency for 2022. 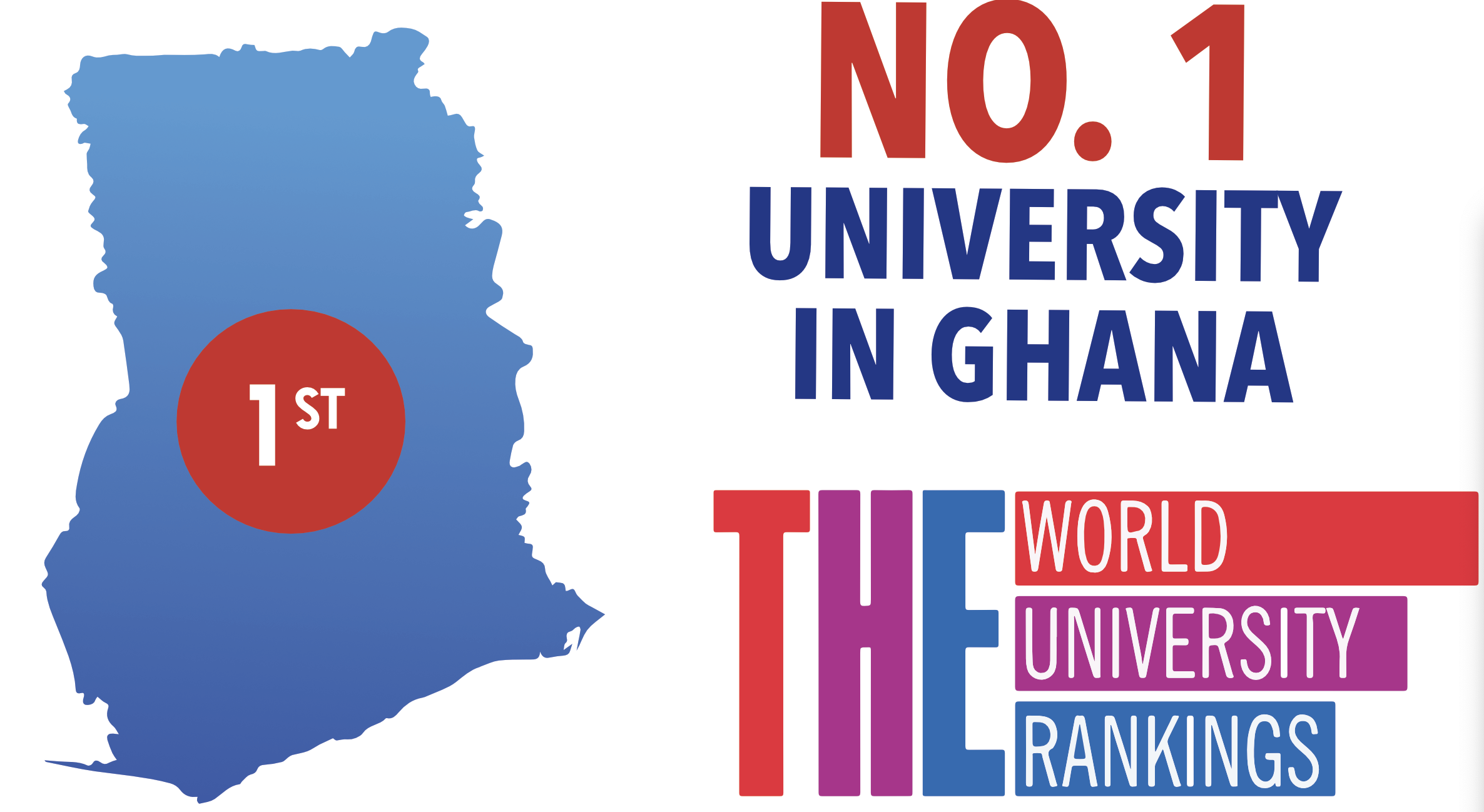 The University is situated in close proximity to about eight communities. The University has always been alive to its responsibility to positively impact on the lives of these communities. In this regard, the University undertakes various projects for the communities, within its budgetary constraints. This in no small measure has contributed to a harmonious relationship that has engendered good academic work.

Areas of support include employment, medical and dental support to the community through its 140-bed hospital.

Records available confirm that over 70 per cent of its out patients are from the communities. The university also has a scholarship scheme that supports brilliant but needy students from the communities. It also supports the communities in the area of sanitation. It has  built an eight-seater  modern toilet facility for the Akotokyir community and is presently in the process of constructing a similar one for the Amamoma community. 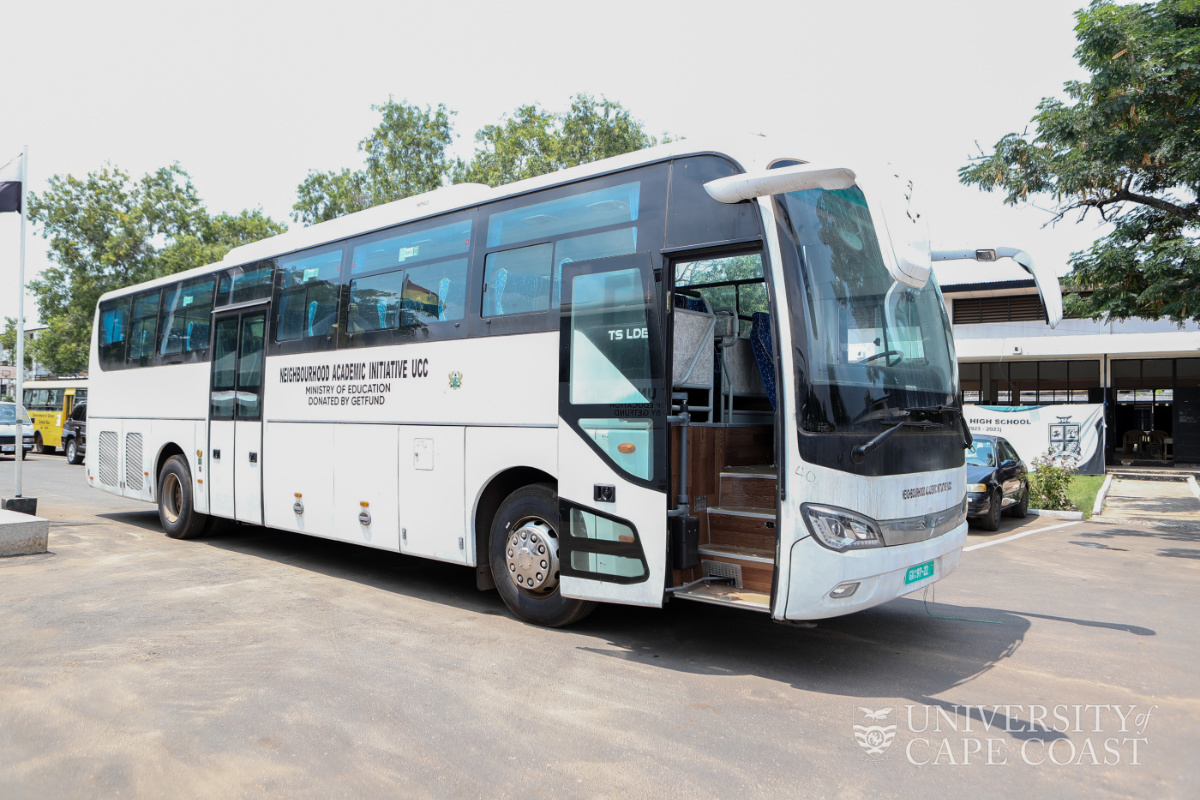 A 66 seater bus  donated by the Minister of Education to facilitate community engagements and academic visitations to basic schools in the Central Region. 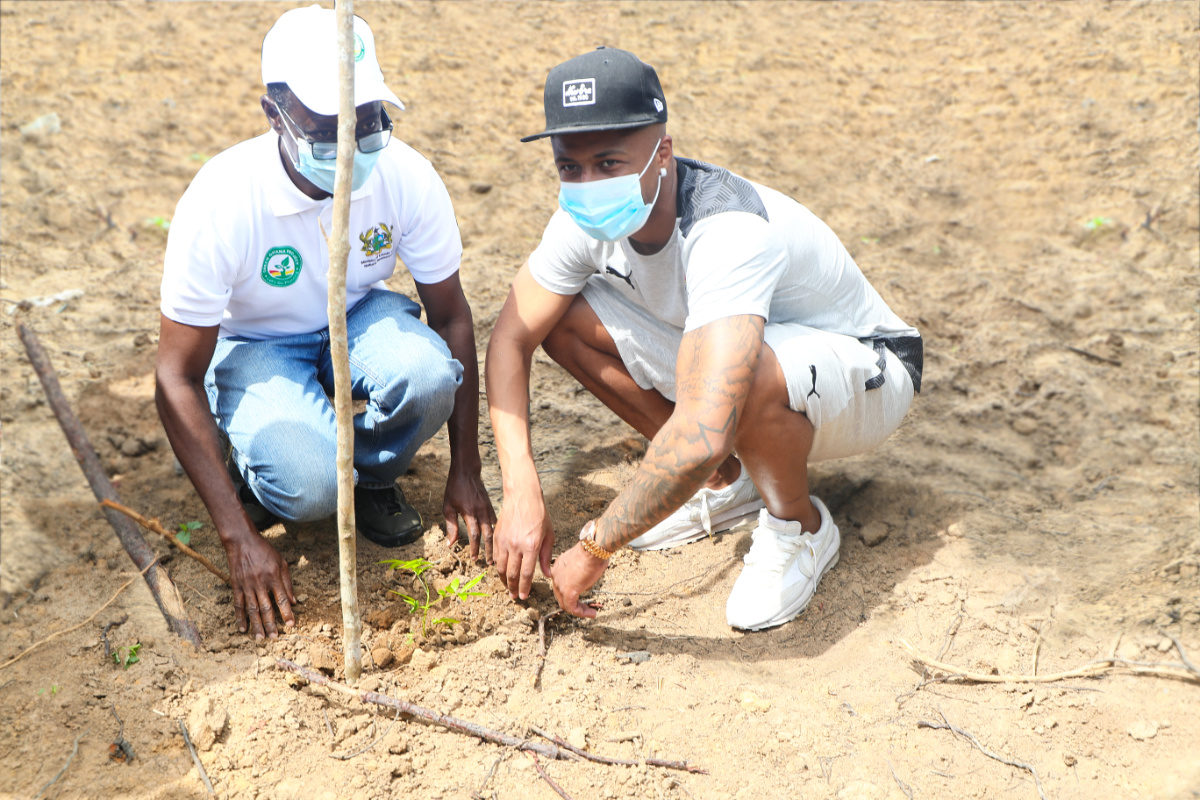 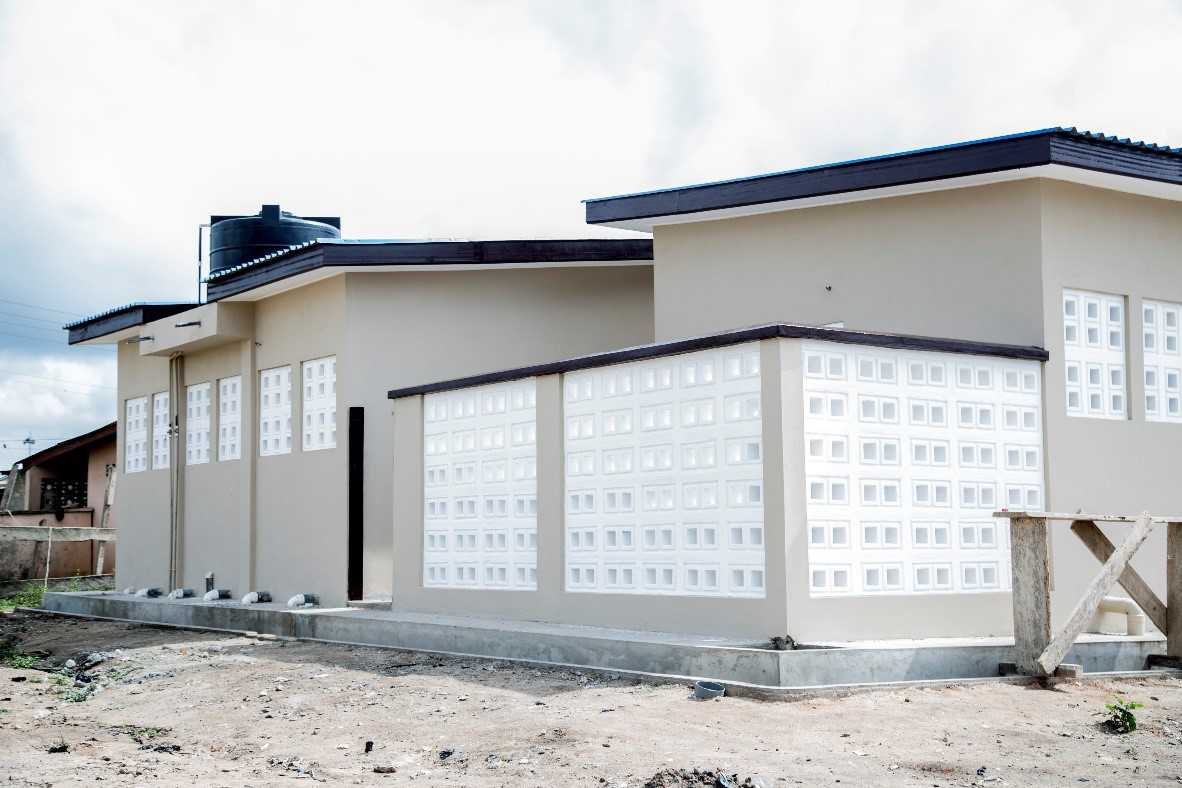 The University’s contribution to national development has been extensive and varied. This has been felt in the educational sector where UCC products continue to impact greatly. UCC has always put the expertise of its staff at the disposal of successive governments whenever needed. This has been in the areas of governance, banking, finance, science and several others. In fact, UCC alumni are found almost everywhere contributing towards the development of the nation.

The University maintains a purely green environment not only to provide a conducive  environment  for academic work  but also serve as a blue print to all not to degrade the environment.

To this end, the University has taken a lead role in participating in government’s Green Ghana Afforestation programme. So far, UCC has planted over sixty thousand  trees on campus as well as some of its satellite campuses. The University owned FM radio station runs educative programmes tailor made to educate the university community on issues of governance, health, sanitation, law and security, agriculture and fishing among others.  These programmes are designed to compliment government’s public education efforts. 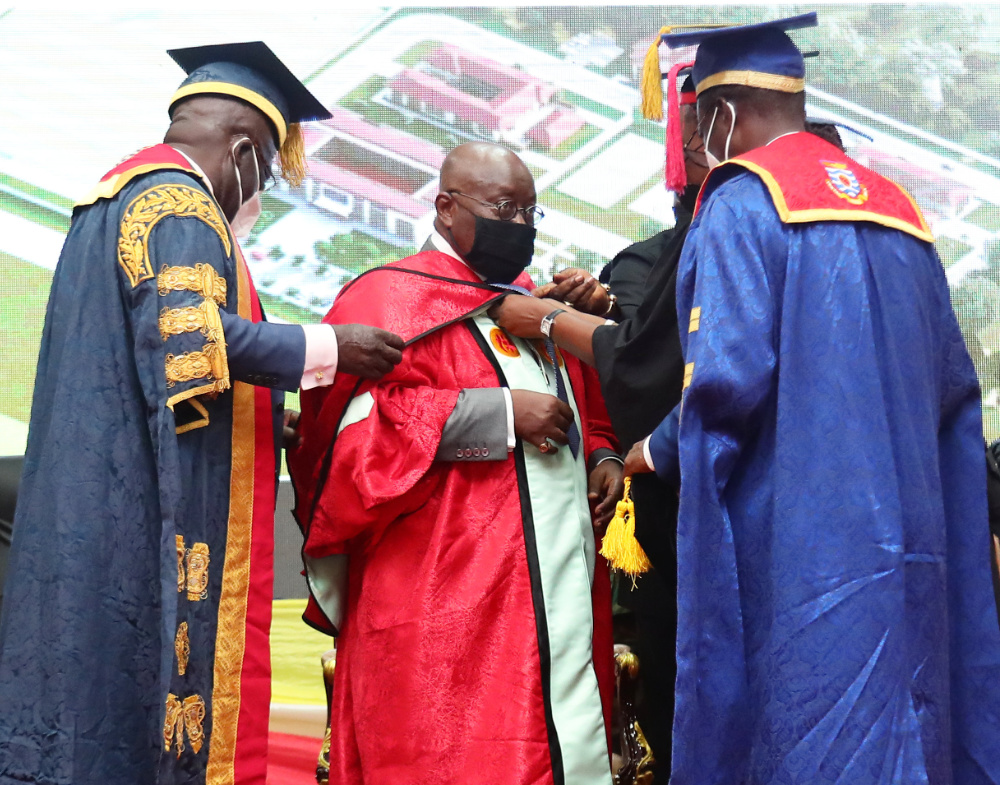 H. E. Nana Addo Dankwa Akufo-Addo, the President of the Republic being robed as Honorary Doctor by the Chancellor and Vice-Chancellor of the University of Cape Coast in 2021. Behind him is projected the building plan of 5, 500 student accommodation facility to be built in his honour.

The University has a short fall in student accommodation resulting in the bulk of students living in the communities. This has had a rippling effect on the safety and security of our students. Incidents of robbery and attack on our students have been reported once in a while. This is in spite  of efforts made at building new lecture theatres and hostel facilities.

Management has set out with a vision to produce entrepreneurial graduates who will fit well into industry or better still establish their own startups and provide employment to others.  To achieve this, a Design Thinking and Innovation Hub (D-Hub) has been established to serve as an incubator to facilitate this dream.

With the advent of Covid-19 the world has come to appreciate the value of digitization and UCC is no exception. A lot of investment is being made in this area to bring the University at paR with its contemporaries in the area of employment of digitization in its teaching and learning. Plans are also far advanced to intensify collaboration with sister institutions in Ghana, Africa and the rest of the world. This will be in addition to the over hundred institutions the University currently collaborate with.

Management is leaving no stone unturned to provide additional accommodation for students on campus as well as other infrastructure to facilitate academic work. Management, staff and students can only look forward to the future with great optimism. One thing which is never compromised by the University is QUALITY, and that is why the UCC will remain, the UNIVERSITY OF CHOICE.