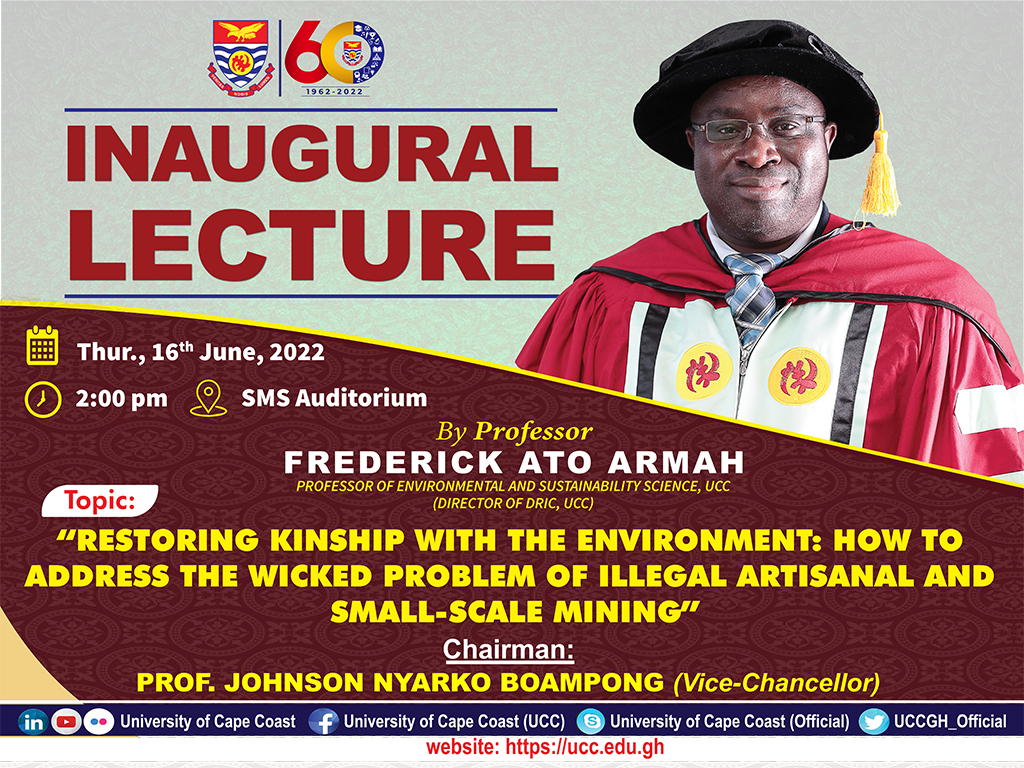 The University community and the general public are hereby invited to the Inaugural Lecture to be delivered by Prof. Frederick Ato Armah, Professor of Environmental and Sustainability Science and Director of the Directorate of Research, Innovation and Consultancy (DRIC)

Topic: Restoring Kinship with the Environment: How to Address the Wicked Problem of Illegal Artisanal and Small-Scale Mining

Only Professors who have given their Inaugural Lecture would be required to robe to welcome their colleague. The gowns would be available at the Reception of the School of Medical Sciences Auditorium on the day of the programme.

All are cordially invited.

Prof Armah has held several prestigious scholarships including the Swedish Institute Scholarship (2006-2008), Netherlands Fellowship (2009) and the Ontario Trillium Scholarship (2011-2015). He is the first individual from sub-Saharan Africa to win the prestigious Ontario Trillium Scholarship. He was awarded as an Outstanding Researcher at the University of Cape Coast for hard work, dexterity, and great dedication to research during the 2015/2016 academic year.

Prof Armah has worked at all levels of the educational ladder (basic, secondary, tertiary) in Ghana starting from 1995. Cumulatively, he has garnered over 20 years of teaching and research experience more than half of which is at the tertiary level. In 2009, he received the Council for Scientific and Industrial Research (CSIR) Science, Innovation and Technology joint award for the best innovative scientist in developing a technique for the removal of fluoride ions in Bongo using local available materials. This award was established to mark the Golden Jubilee of the CSIR. Following this award, he was briefly part of a team of scientists that developed technologies to produce safe drinking water using laterite, a soil-type, rich in iron and aluminium, as a sorbent and ultra-filtration for physical disinfection. This initiative was part of a collaboration between researchers at the Kwame Nkrumah University of Science & Technology in Ghana, and the University of Edinburgh, UK titled, "Safe Drinking Water using Appropriate Technologies for Ghana (SADWAT-GHANA). Under the aegis of SADWAT-GHANA, the Ghana Academy of Arts and Sciences and the Tanzania Academy of Sciences, he was invited by the UK Royal Society to attend the first Leverhulme—Royal Society Africa Award Holder Meeting in Dar es Salaam in December 2010.

As the Head of the Department of Environmental Science (August 2016 - July 2018), Prof Armah established collaboration with the Centers for Natural Resources and Development (CNRD) at the University of Applied Sciences, Cologne, Germany. CNRD is a consortium of about 20 higher education institutions that connects universities worldwide by promoting academic exchange and cooperation in the field of natural resource management, particularly with regards to water, land, ecosystems and renewable energy. Prof. Frederick Ato Armah also established the Margaret Wulesie Award of Excellence in Environmental Science, in honour and memory of his late mother, Margaret Wulesie. The award, which is worth 1000 Ghana Cedis is given to an Environmental Science graduand who obtains a cumulative grade point average (CGPA) of 3.8 or better. Prof Armah vigorously pursued an agenda of equipping the Environmental Science and allied laboratories in the School of Biological Sciences during his tenure as head of department. He was instrumental in the donation of equipment and accessories worth over 150,000 Ghana Cedis to the department by the Copenhagen Business Academy (CPH), Denmark (see pages 8-10 of UCC Bulletin Volume 54 Issue 1, September 2018).

As Deputy Director of DRIC from August 2016 to April 2019, Prof Armah coordinated the development of the first UCC Intellectual Property Policy (IPP) and co-chaired the committee that crafted the first ever UCC Research Report, which has since received extensive critical acclaim. He also chaired the committee that developed the 2018-2022 UCC Research Agenda, which gives expression to the research tenets and trajectory of UCC as set out in the 2018-2022 Corporate Strategic Plan. As Deputy Director of DRIC, Prof Armah also successfully led UCC to apply for the Queen Elizabeth II (QES II) Advanced-Scholars programme, which seeks to establish research capacity and leadership qualities in young African and Canadian scholars in order to enable them to competently address global challenges pertaining to Environment, Food and Health. Through this initiative, the University of Cape Coast sent one QES II Scholar to Western University, Canada in 2018 to undertake research under the supervision and mentorship of a very experienced team of faculty members, for a minimum period of 90 days. Prof. Armah was also actively involved in the successful application for and implementation of the African Trans-Regional Cooperation through Academic Mobility (ACADEMY) Project. This is a 1.4-million-dollar EU-Intra Africa Mobility Grant, which seeks to foster mobility of staff and students among partners in the consortium (UCC, Ghana, Tlemcen University, Algeria, University of KwaZulu-Natal, South Africa, University of Ibadan, Nigeria, and Kenyatta University, Kenya) to deepen cross-cultural learning and enhance regional capacity building in higher education.

Prof Armah is the UCC team lead on the 2.5-million-dollar partnership grant titled Appraising Risk, Past and Present: Interrogating Historical Data to Enhance Understanding of Environmental Crises in the Indian Ocean World. This 7-year initiative seeks to enhance historical understanding of the factors at work in past environmental crises, and thereby significantly improve currently employed environmental risk perception and governance (ERPG) tools. The team consists of 8 Co-Applicants, 17 Partner Institutions, and 23 additional Collaborators (including UCC) spread across 17 countries in Africa, Asia, Australia, Europe, and North America. He is a co-applicant and the team lead for Ghana on the 2.5-million-dollar Vulnerability to Viability (V2V): Global Partnership for Building Strong Small-Scale Fisheries Communities research grant. Prof. Armah is also the country lead for the 2 million-dollar Project—Farmer Organization, Mobilization and Political Opportunities (‘FOMPO’), which is sponsored by the Swedish Research Council (FORMAS) and Lund University, Sweden (2020-2024).

Prof Armah is currently a member of the National Technical Committee on Environmental Quality Standards in Ghana. In March 2019, he was appointed as a member of the France-Ghana Nkabom Scientific Committee that reviews joint proposals submitted by academics in both countries on energy and renewable energy, environment and climate change, engineering sciences; biology and biotechnology. In 2015, he was appointed by the United Nations Environment Programme (UNEP) to serve on its Global Panel of Experts on the Environment. At the time, he was the only scientist from Ghana among the team of experts drawn from over 110 countries by the UNEP Chief Scientist to develop the regional assessment reports that served as precursor to the 6th Global Environment Outlook. In 2017, based on his meritorious contribution to the Africa regional assessment, the UN Chief Scientist subsequently nominated him to be a lead author of the Air Policy Effectiveness chapter of the Global Environment Outlook 6 (GEO-6) Report, which was launched by the UN Environment Assembly in March 2019. This report is now published by the Cambridge University Press.

Prof Armah was an Associate Editor of the African Geographical Review (Taylor and Francis) from 2013-2016. He is currently an Associate Editor of Frontiers in Environmental Science Journal in Switzerland. He also serves as an External Examiner for the Master of Science programme in Environmental Science at Rhodes University, Grahamstown, South Africa. He has reviewed for over 60 international journals. He also served as External Reviewer for the Human and Institutional Capacity Development Directorate of the National Research Foundation (NRF) of the South Africa Thuthuka Programme. He was External Reviewer for the International Council for Science (ICSU) and the Network of African Science Academies (NASAC) Africa LIRA 2030 proposals on understanding the Energy-Health-Natural Disasters nexus in urban contexts in Africa. He has also reviewed for the the Netherlands Research Council. In February 2020, Prof Armah was nominated to serve as a nexus assessment scoping expert on the Intergovernmental Science Policy Platform on Biodiversity and Ecosystem Services (IPBES).

He is a member of several professional organisations including the International Association of Hydrological Sciences, International Society for Environmental Information Sciences, Earth Systems Governance, International Society for Development and Sustainability, Japan, and the Institute for Research on Environment and Sustainability, UK. He is a member of various communities of practice including the Climate Change and Forestry Adaptation Communities of Practice: Ontario Centre for Climate Impacts and Adaptation Resources (OCCIAR), Canada and Too Big to Ignore (TBTI): Global Response Cluster of the Integrated Marine Biogeochemistry and Ecosystem Research (IMBER). He has attended over 90 seminars/workshops/conferences/webinars organised in eleven countries across the globe. Prof Armah has given numerous guest lectures at high ranking universities including the University of Toledo, Ohio, USA, University of Dar es Salaam, Tanzania; and Pennsylvania State University, USA.

In October 2021, Prof Armah presented on Excellence in Research and Grants writing to Vice-Chancellors, Principals and Directors of Public Universities and Colleges, Zambia during the Zambia Association of Public Universities and Colleges (ZAPUC) Leadership Capacity Building Workshop. In November 2021, Prof Armah was part of the eNubia panel discussion on Scaling African Research Innovations in Science, Engineering, Health and Development by Utilizing Artificial Intelligence & Data Science. He spoke specifically on African Research: Utilizing Data Science & AI to Solve Challenges in Health, Industry, Disease Prevention and Development. He has also presented on building research assessment reform into regional open science policy in higher education institutions in Africa as part of the Library Support for Embedded NREN Services and E-infrastructure (LIBSENSE) and the Declaration on Open Access (DORA) open science workshop in March 2022. He has been hosted by the Cambridge University Libraries of the World podcast where he presented on open access publishing in sub-Saharan Africa.

Prof Armah has been championing the visibility agenda of UCC aimed at highlighting the University’s research and teaching output through dissemination in recognized channels. In this regard, he has been very instrumental in facilitating a series of workshops and sensitisation programmes on scientometric indicators and webometrics ranking and its relationship to quality education and research. He coordinated the first Elsevier workshop regarding academic writing and global visibility on UCC campus. He successfully directed two rounds of the UCC Research Support Grants (RSGs) and Research Awards, during his tenure as Deputy Director of DRIC. Many of the RSGs he coordinated have culminated in the publication of very good papers in high impact ISI or Science Citation Index (SCI) journals. At DRIC, Prof Armah led the Vice-Chancellor’s agenda of increasing the number of faculty members on Google Scholar. Through his instrumentality and concerted efforts with key stakeholders, the number of UCC faculty members on Google Scholar more than quadrupled between 2016 and 2018.

A number of establishments that track scholarly achievement consistently rank Prof Frederick Ato Armah among the most visible, topmost scientists in Ghana and beyond. These include Google Scholar, Web of Science ResearcherID and ORCID, Scopus, ResearchGate and Publons. In 2017, Publons ranked him as one of the top one percent of reviewers in multidisciplinary academic fields. In 2018 and 2019, Publons ranked him again as one of the top one percent of global reviewers in the field of Environment/Ecology. In 2020, Prof. Armah won the Association of American Publishers Awards for Professional and Scholarly Excellence (PROSE) in Environmental Sciences, together with co-authors on the Sixth Edition of the UN Global Environment Outlook Report. This award recognises the very best in professional and scholarly publishing by celebrating the authors, editors, and publishers whose landmark works have made significant advancements in their respective fields of study each year. Through his instrumentality and concerted efforts with university management and allied stakeholders, UCC is ranked as the best university in Ghana and West Africa in the 2022 Times Higher Education World University Rankings.

Professor Frederick Ato Armah was born in Kumasi on 3rd November 1973. His primary education was oscillatory owing to the fact that his dad, an engineer in the Ghana Army, was often on transfer. He began his education at the Life Corps Montessori School in Winneba. He continued at the Station Experimental Primary School at Kamina Barracks in Tamale. He then moved to Complex primary school at Burma Camp in Accra, where he sat for the common entrance examinations in 1986. He had both his O’ Level and A’ Level education at the Koforidua Secondary Technical School, Koforidua.  He is married to Mrs Nesba Yaa Anima Armah and the couple have a daughter Aseda Ewuraesi Armah.

Restoring Kinship with the Environment: How to Address the Wicked Problem of Illegal Artisanal and Small-Scale Mining